Northern and central of Chile are some of the undercover regions by Earling. Every month this regions have one or more quakes larger than M5.Accuracy of detecting an unusual activity differs region by region and due to high activities larger than M5 in these region, Earling no longer issues Earthquake Preparedness Alerts for the region and we are only focused on issuing FirstNotice for exclusive partners.

Ecuador, a country exposed to a high seismic hazard from megathrust subduction earthquakes and moderate‐to‐large shallow crustal earthquakes. Building on the knowledge produced in the recent historical seismicity and earthquake catalogs earthquake recurrence models are developed. As the result 6 days before M6.2 earthquake rock Ecuador, Earling preparedness alert issued for the region .. more

The south, east, and center of France recent earthquakes of M4+, since 2019, followed by Earling FirstNotice alerts that issued days before the earthquakes getting occurred.

All of the Commonwealth Caribbean countries, with the exceptions of Bahamas and Guyana, lie close to the known tectonic plate boundaries. One of the latest major earthquakes rocked the region is a M5.5 near Martinique on Friday, September 28, 2018 - 12:38 while Earling preparedness alert was issued for the region days before more

Icelandic Meteorological Office received an email from Earling team, days before the Iceland largest earthquake since 2008. Then M5.6 earthquake rattled the capital on 21 Oct 2020.

Iran is crisscrossed by major geological fault lines and has suffered several devastating earthquakes in recent years.
On 9 July Early issued a preparedness alert for south of Iran focused on Hormozgan. On July 13 09:03:24.7 UTC a M4.7 earthquake hit North of Bandarabass which followed by 2 quakes struck Hormozgan province in the south in the day 7 with magnitudes 4.7 and 5.7 on Sunday, 22 July, hours after a magnitude 5.9 earthquake hit western Iran, injuring at least 287 people more

M5.4 quake on 29 Dec 2020 11:20 rattled northern of Italy. Felt reported by residents in Milan, Venice, Pordenone, Bologna and other cities more than 150km separated from the epicenter. Earling successfully issued FirstNotice alert days in advance for the quake.

It was midnight Sep 26 2018 and about 3 weeks after the latest major earthquake in the region that an alert received by Earling earthquake forecast algorithms from Sapporo region .. more

One of the latest preparedness alert issued in Kyrgyzstan was a very shallow M3.7 - Depth 1Km which hit the specified region the day after alert issued and about 4 weeks after the latest earthquake .. more

Ground motion prediction equations appropriate for Lebanon has been tested in recent ground activities in the region by Earling. As the result Earling was able to issue preparedness alert days before one the latest earthquake rocked East of Lebanon.

The largest city within the highest-risk zone is the nation's capital, Wellington, followed by Hastings then Napier. All these cities have experienced severe earthquakes since European settlement like the M8.2 Wellington earthquake. About 14,000 earthquakes occur in and around the country each year, of which between 150 and 200 are big enough to be felt. But Earling was able to issue preparedness alert for some the latest earthquakes >= M4.0 Richter for the region. Despite the numerous number of earthquakes in the region, Earling algorithms which analyze billions of environmental regional data everyday, are able to distinguish earthquake patterns can be followed by major events from everyday shakes. As the result Earling issued several preparedness alert days before which some of them are here more

Norway experience only a few minor earthquakes in 2018. South and South West of Norway are undercover by Earling and it successfully detected earthquake pre-indicators in the regions since July 2018. The regions experienced 4 earthquakes > M3, followed by earthquake preparedness alert. In 2019, Earling issued an alert 5 days before the only M4 earthquakes in the undercover region in that year. Earthquake great that M4 is reported 420 days before, which represents accuracy of Earling in Norway as a low seismicity region is high. M4.5 25 Jan 2020,

Even one of the latest 5 years long studies that brought over one hundred natural seismic events wasn't able to receive more than one greater magnitude 3.8 earthquake in Poland. Despite the chance of detecting a pattern that can cause a noticeable earthquake in the South and East wasn't easy, Earling has been issued 3 preparedness alerts from hours to days before they rock the regions .. more

Earling issued an FirstNotice alert for the latest greatest earthquake days in advance. Contact us for more information.

About 3 weeks after the latest light intensity earthquake which rock one of the most populated region of Taiwan, a preparedness alert issued by Earling for the region, 3 days before a M4.2 earthquake shake center of Taiwan .. more

UAE is not a earthquake prone region, but it easily had been affected by the Hormozgan earthquakes in Iran. Earling algorithms were are very successful to detect high-risk time-window for the region, days before the northern region of UAE getting affected by major earthquakes in Hormozgan.

Earling informed more than 50 specialist about risk level changes in California on 16 Dec 2021. On 20 Dec 2021 a M6.2, 5.7 and 4.0 earthquakes rattled the region and represented how short-term seismic risk works and how accurate are the models generated by Earling. 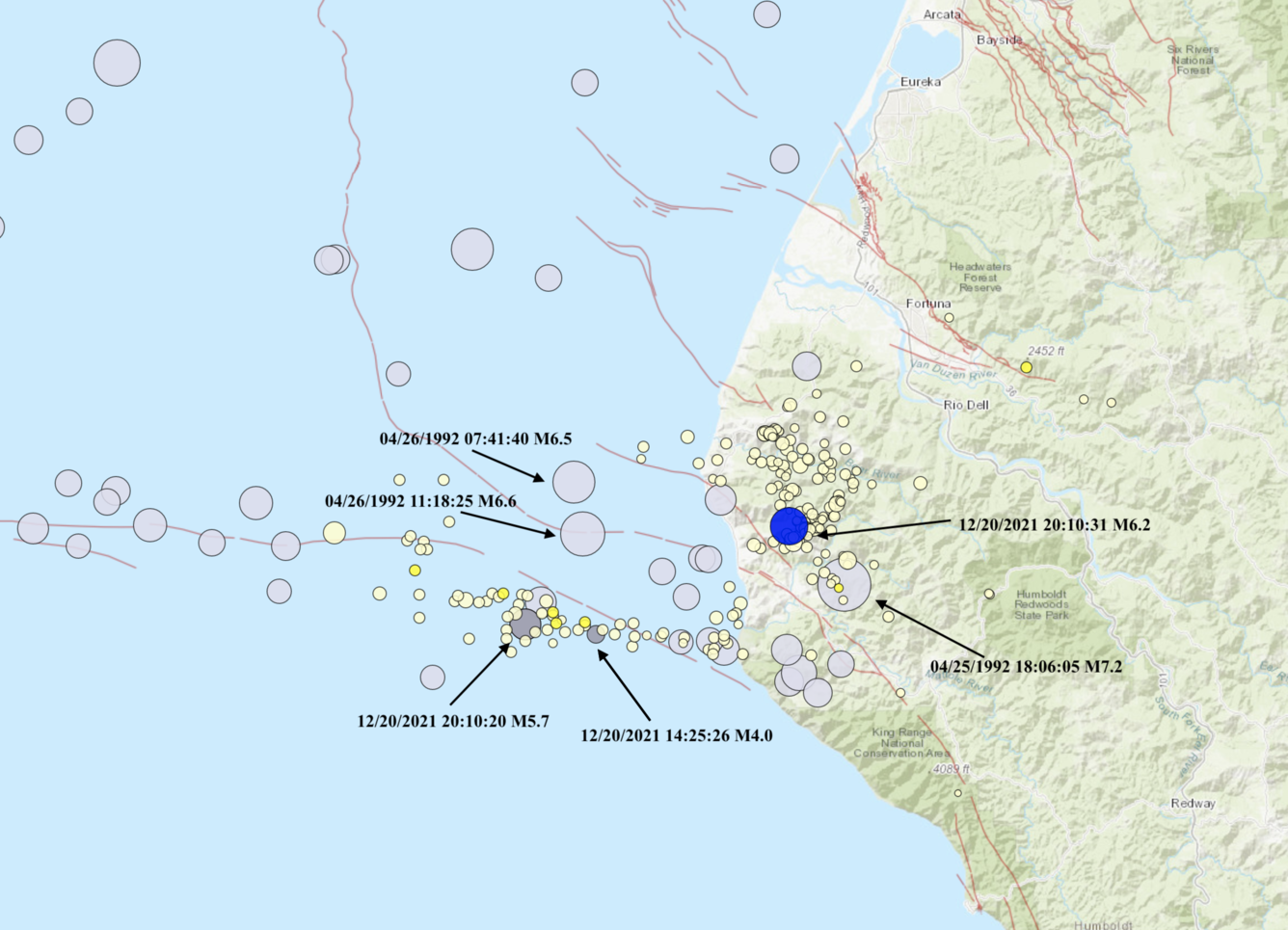 Source: USGS
Map showing the revised location of the M6.2 earthquake (blue circle) that occurred on 12/20/2021. The magnitude 5.7 and 4.0 foreshocks (dark grey) are located offshore along the Mendocino fault. Aftershock of this sequence are shown in yellow and historical earthquakes of magnitude 5 and greater in the last 40 years are shown in light grey.

Center of Venezuela have received FirstNotice for the recent unusual earthquakes.

Several major potential seismic sources capable of generating large magnitude earthquakes (M8) have been identified in the region surrounding Hanoi, within a radius of about 250km in recent studies.
Earling preparedness network continuously is monitoring Hanoi and South of Vietnam by distinguishing everyday ground shakes from patterns that may cause an earthquake. As the result Earling was able to issue preparedness alerts for two of latest minor earthquakes for the regions two days before the earthquakes happen more